Well, just as the title says. Shortly after I bought Halo 3 from GameStop, I went to play some multiplayer with friends. I stupidly started the game before I moved the console to an optimal location for our multiply frenzy. When I picked up the Xbox, I reached under where the game DVD residesâ€¦ and lifted the console in which I heard sounds of horror come from within the Xbox. Sounds as a game enthusiast you never want to here. I knew from that moment Halo was being viciously attacked from within the console. There was nothing I could do. Somehow when I lifted the system, it unbalances the game disc and scratches the hell out of it. I took pictures: 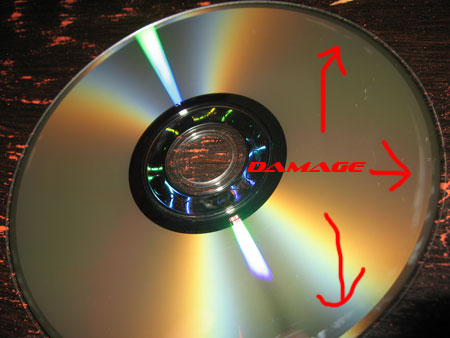 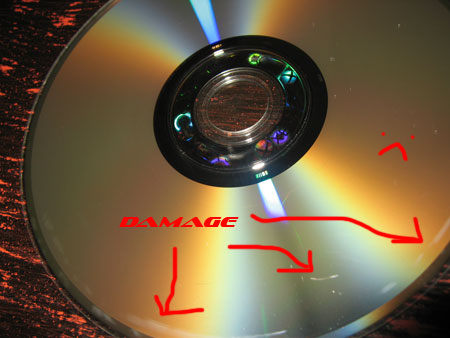 So, instead of me throwing this disc away like I wanted to do, a friend recommended that I give it away. What kind of value does a scratched game like this have (which does not work)? Well, as a past Blockbuster employee, I know kids like to rent good games and return their scratched non working games all the time. Why? Well just for this reason! So, if you want a scratched non working version of Halo 3, leave a comment here and I’ll pick the lucky new owner! I usually don’t post often, so I don’t expect to have a lot of comments, so if you really want this game, here’s your chance!

P.S. I do not condone scamming Blockbuster for a new version of Halo. You’re free to use this game in any way you want.

You could have used car polish, Brasso or toothpaste to polish out those scratches. I ‘m glad Maureen didn’t win, how could anyone expect to win being so undeserving calling people losers? Nasty attitude.

It’s actually been over for awhile, I just forgot to close comments.

Closed now, thanks for everyone playing!

hello my name is maureen and my son has wanted this game for a long time i know im probobly not going to get it for my son but we have something to clean it unlike the losers on here that can’t email me if i win or even if i lose please. thank you

Wow, an Xbox 360 Halo 3 game for free! That’s got to suck that it got scratched.

I would love that game considering I cant afford it